People hurt you … intentionally or not. A lover. A family member. A friend. A complete stranger. They all have the power to do or say something that hurts.

The older you get, the more you realize how small and insignificant these hurts are in the great scheme of life. You don’t get easily offended or upset anymore. You are a monument of wisdom, acceptance, even selfless platonic love. You’re darn close to being a saint.

Nothing can stop you now from reaching that once elusive emotional nirvana. Nothing … except a perfectly timed punch in the gut (a figurative one … hopefully) that knocks you off your carefully built pedestal. You’re not a monument of anything anymore. You’re a mere mortal again.

When that happens remember these bits of wisdom:

Let me try to explain:

Still, there is another group. The people who have enough self-esteem and enough wisdom to know that revenge is for the weak and insecure. Revenge doesn’t bring healing. It delays it.

Instead of spending countless hours plotting how to hurt someone back, take some time to look at yourself and figure out why you were vulnerable in the first place. You’ll be stronger because of it.

There are times when people hurt you on purpose. When that happens, go ahead, be all-merciful, all-magnanimous and forgive them. Bring it up often too. Never let them forget how noble you were! Just kidding … of course. Forgive … but then be kind enough to not talk about it ever again. Nobody likes to be reminded of their past mistakes.

There are also times when forgiveness is not needed.  The best example I can think of is: you love somebody but they don’t love you back. You’re hurt, of course. Yet, you can’t tell me that the other person did anything wrong. Unless they promised you the sun, the moon, and the stars … but then disappeared and left you alone in a cold and dark cave. In that case, sacrifice your soul to the dark gods of unrequited love and ask them to torment the object of your affection until the end of his days. Just kidding … again.

Getting back to being serious now: there are times when there’s nothing to forgive. Nobody did anything wrong, yet you still got hurt. When that happens, lick your wounds, take the time to heal (see my pointers on crying, dancing, and chocolate), and move on.

I don’t like crying. I especially dislike it when it’s witnessed by someone else. But, I’ve learned that it can help heal. It does make it easier to let go of the pain you have inside. Another good thing about it: it’s not as expensive or dangerous as the alcohol or drugs some people use to numb their pain.

Plus, numbing pain doesn’t work. I came across this quote today. It’s perfect for this little post.

“Numbing the pain for a while will make it worse when you finally feel it.”

– J.K.Rowling, “Harry Potter and the Goblet of Fire”

Just because this quote came from a work of fiction, doesn’t make its point less real. Crying helps release the pain you feel inside. Do it in private. It feels better that way.

There is one song that never fails to make me dance. It’s “Supermassive Black Hole” by Muse. All I can say is: A W E S O M E!!! It makes me look like the Tin Man in the middle of a seizure, yet it makes me feel like a supermassive cool bad ace!

And, once I’ve played Muse at least a dozen times, I put on “Cotton Eye Joe” by Rednex. Don’t ask! I won’t tell.

Finally, when I say chocolate, I mean good chocolate. Sorry, America, but Hershey doesn’t count. Go get a nice bar of Lindt or Milka. It’s best if you can find the milk chocolate with hazelnuts. You’ll understand why after your first bite.

If you don’t listen to me, listen to Boromir here. He messed up the whole ring affair, but his point about chocolate is right on! 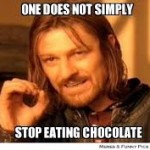 Like everyone else, I get hurt from time to time. Sometimes, I wish I could have avoided that pain. Yet, there are times when I’m actually thankful for it because it made me learn new things. It brought new people in my life. Maybe things didn’t work out the way I would have wanted them to, but my life is richer because of these experiences.

Here’s another picture that made me smile. What can I say? It doesn’t take much. 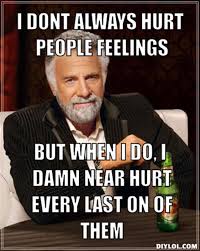 P.S. This post is about the punches people throw your way. Not the ones life does. Those are more serious. I’m not in a serious enough mood to talk about that yet. Plus, I’m too busy listening to Supermassive Black Hole. I love that song!!!