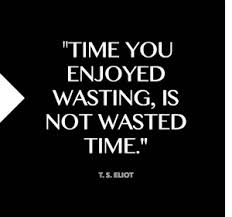 Yesterday I wrote about my first reading of T.S.Eliot’s The Waste Land and how I felt about it once I was done. If you read that post, you already know the answer. In a word? Dumb!

You also know that I decided to go back to reading it the following day. This time I went at it at an angle. Instead of reading the poem right away, I started reading more about T.S.Eliot, his life, his work, his mentally unstable first wife, the nervous breakdown caused by that marriage, etc, etc.

That information helped. I’m not going to be mean and say why it helped. I’ll let you draw your own conclusions. What helped even more though, was something I read in a commentary on The Waste Land. Here’s part of that commentary:

One allows that the apparent chaos of the work, the difficulty, the excess, is in some way mimetic of the dazzling and sometimes incoherent world outside, and also that things will not be presented in a neat, clear narrative structure, because anything too conventional or too easily accessible would be consequently trite – one must work hard to glean important insights from the modern zeitgeist. Modernists believed that the more complex a text is, the more likely it is to do justice to the complexity of the world outside […]

After reading the above passage I finally understood what had been puzzling and hard to understand the previous day: I wasn’t supposed to understand The Waste Land. Not after the first reading, anyway! Does that make sense? Do you understand what I’m trying to say? Am I trite enough or am I being just a bit incoherent?

I’ll try to be serious for the next few paragraphs but I’m sure I’ll fail. The world is too complex, too messed up, and too darn serious already. In my opinion, we need some comic relief any way we can get it.

Back to The Waste Land: I didn’t like it more the second time I read it, but I started seeing it as a puzzle instead of a poem. A problem to be solved. I’m sure I’ll be going back to it quite a few times in the near or not so near future and try to “glean its insights”.

I might figure it out or I might fail. Most likely, The Waste Land will be to me what James Joyce’s Ulysses is to Elizabeth Gilbert. This is what Elizabeth has to say about the famous modernist novel.

Every ten years, I think, “Maybe now I’m finally smart enough or sophisticated enough to understand Ulysses. So I pick it up and try it again. And by page ten, as always, I’m like, “What the HELL…?”

In conclusion, I’ll give you one other favorite quote of mine about poetry. This one comes from Mark Twain.

I agree completely. Only, I’m not so sure that’s a very good thing!

I’m going back to my trite fiction and my trite poetry now. They might be incoherent, chaotic even, but that’s not by choice. I’m definitely not a modernist.

P.S. Here’s another good quote about Ulysses. This one comes from Anthony Burgess, one of its proponents:

The book is “inimitable, and also possibly mad.”