I’m an alien. Not the kind of alien who came from Mars to study your brain and kidnap your young ones. I’m the boring kind: the one who was born in a poor Eastern European country and, one fateful online encounter, five hundred dollars, and several questionable decisions later, found herself an American citizen. That happened over fifteen years ago. It’s a good story but I won’t go into its details because my immigration adventures are not relevant to this blog post.

What is relevant is that English is not my native language. Do you know what that means? It means that I used to be able to freaking swear in English and not bat an eyelid about it. Do you know why that is weird? It’s weird because I never swore in my native language. I blushed if I even thought of a swear word I had accidentally overheard. Forget about being able to actually say one out loud. Yes, I was that prudish.

Swearing in a foreign language is very easy. Don’t believe me? Try this: take one swear word you find particularly distasteful or crude. Now run it through an online translator and see how someone who lives in Paris would say it. My guess is that it won’t offend you at all. Whether I ask you to say “jardin” or “merde”, you’ll say either word just as easily. Without any uncomfortable feelings. It’s all going to sound French to you.

But what happens if that foreign language becomes your “everyday” language? What happens if you move to France? Well, if you were to spend fifteen years there, I’m pretty sure you’d have no problem saying “jardin” anytime, but you’d make sure there are no little kids around before saying “merde”.

What I find interesting is that the change doesn’t happen because you learn the meaning of those words. The change happens because you experience the reaction French people have when hearing those words.

That’s how it worked for me. Before coming to the US, I couldn’t even utter the equivalent of the word “crap” in my native language, but I could easily say “sh*t” in English (and I knew perfectly well what “sh*t” meant). Once I moved to the US though, I cleaned up my vocabulary faster than you could say f…udge.

The reason I’m talking about profanity today is that Chuck Wendig’s latest flash fiction challenge is to write filthily. Or write about filth. A 2,000 word piece about sex, profanity, perversion. Anything a dirty mind could come up with.

If you want to find out why Chuck is hell bent on getting people to open their big potty mouths and show who has the most colorful R-rated vocabulary, you should go to his blog and read the posts about the Clean Reader app (an app that “scrubs profanity out of e-books”). It’s an interesting debate. It’s also one of the few times I don’t agree with Chuck. That’s OK. I still love him and his writing style. And his bloody brilliant filth-filled mind.

What I’m wondering now though is: how the heck am I going to complete this challenge?

See, I have no problem with profanity anymore. In the grand scheme of things, it means crap. Who gives a dime that you loved a song so much and called it “F-ing unbelievable” while I, all proper and such, called it “incredibly powerful”?

I’m now wise beyond my thirty some years and laid back enough not to be offended by “swear words”. In my mind, I might even call that song “freaking unbelievable” also. (Sorry, I don’t actually swear in my mind either! I know: I’m still freaking prudish!)

But here is the thing: I can listen to profanity. I can read it. And I sure as heck see the fun in … doing it. Yet, for some weird reason, I have a mental block when it comes to saying it out loud or writing it down.

Sooooo, my question remains: how am I going to complete this challenge? Hmmmm, I’ll have to be bloody creative with this one. My feeling is that it’s going to involve a French maid and an Italian gigolo engaged in the universal language of making accidental babies. Heavy on stereotypes and foreign language swearing, but still fun somehow. We’ll see. 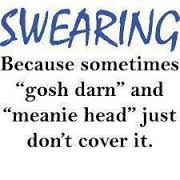 P.S. I’ll try to write a post about how I swear when I absolutely have to (because everyone has to swear sometimes. I have no doubt about it.) It’s funny.

P.P.S. Below is one of my favorite Damien Rice songs. Notice any swearing in there? LOL